For the first time in more than 40 years, the District counts over 700,000 residents—one more milestone in the city’s upward population trend.

Virginia and Maryland both saw modest relative increases, too. The commonwealth added 50,000 people for a total population of about 8.5 million people, while Maryland grew by 20,000 people to 6.04 million.

Around the country, Nevada and Arizona saw the largest relative increases—1.9 and 1.7 percent respectively—while Texas and Florida grew the most in terms of total numbers. Nine states and Puerto Rico saw declines.

Since 2010, the District’s population has expanded by more than 15 percent. The large influx of newcomers has driven housing prices up, pricing many native Washingtonians out of their longtime neighborhoods.

The latest data shows that the rapid increases of recent years—the city was the fastest growing “state” in 2015 and the third-fastest in 2016, with more than 1,000 residents moving in a month—has slowed somewhat.

D.C. added 6,764 people last year, according to data from the mayor’s office. Babies account for much of that figure, with more than 9,700 Washingtonians born this year. Mayor Muriel Bowser celebrated the 700,000 milestone back in February by highlighting the birth of baby Kooper (who later came to her State of the District address). Births minus deaths totalled 4,104 people, while the remaining 2,656 came from a positive net migration total.

“Over the years, we’ve made big investments in making D.C. a great place live, do business, raise a family, and grow old. Our continued growth shows that those investments are paying off,” Bowser said in a press release.

Now we just need to find out how many cats there are. 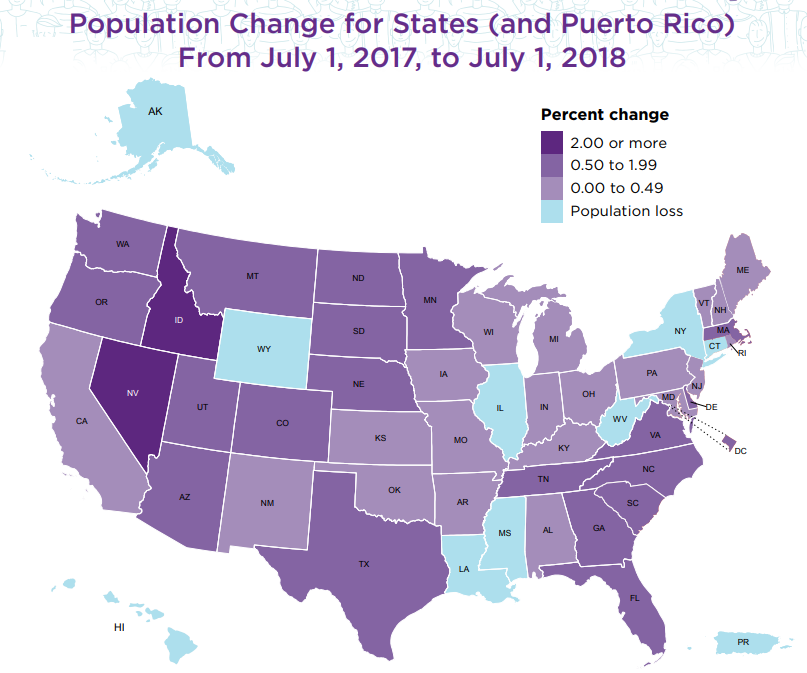 How state population changes stack up against each other.U.S. Census